The Most Famous Celebrity Weddings Ever

Home » The Most Famous Celebrity Weddings Ever
Previous Next

The Most Famous Celebrity Weddings Ever 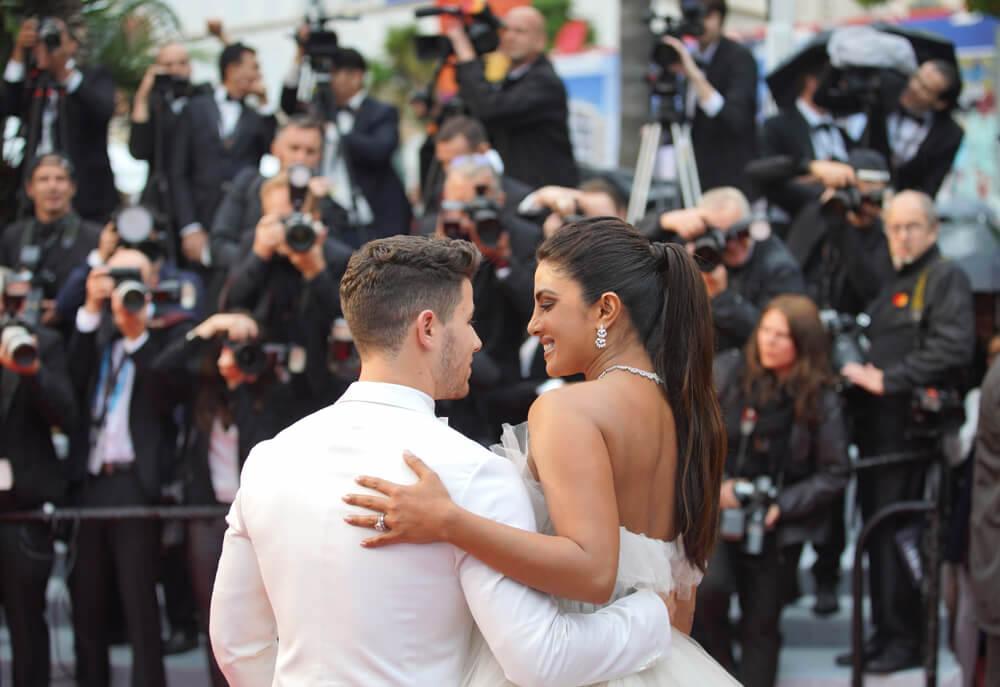 Is your wedding coming up? Are you looking for inspiration on dresses, reception ideas and wedding themes? Whatever notches up your excitement, it’s safe to say that celebrity weddings are some of the best events to keep an ear out for.

To give you an idea of how much celebs can do to make their big day successful, we have compiled the most famous celebrity weddings ever. Granted, some of these unions don’t last beyond several anniversaries, but you gotta agree when celebrities hold their nuptials you live to remember.

Let’s dive into the glamorous venues, ‘who is who’ guest lists, lavish receptions, and designer bridal dresses. Here is a countdown of the most recent top celebrity weddings of all times.

Elizabeth Taylor was one of the biggest names in Hollywood at her peak. Her marital life also put her in the headlines over the decades; she was married 8 times to 7 husbands, and yes the math is right, she was married twice to Richard Burton. However, it is her first marriage, to Conrad Hilton, that has stuck to our minds.

Elizabeth was a rising star and Conrad was heir to the Hilton Empire. At only 18 years of age, the movie star found herself in the center of a huge wedding paid for by MGM film studio. How big? Well, without counting the over 3000 fans outside Church of The Good Shepherd, 600 of Hollywood’s top elites made up the guest list.

Jacqueline and John Kennedy got hitched on what was the social event of the year. Over 800 guests were in attendance including diplomats, senators and government officials. 2000 fans stood outside St Mary’s Church, Newport, Rhode Island hoping to get a glimpse of the happy couple.

Pope Pius XII had sent a message which was read by The Archbishop of Boston, the presiding clergy. The reception was at Hammersmith Farm with an additional 400 guests attending. It took Mr. and Mrs Kennedy two hours to greet those standing on the receiving line before they were off to their honeymoon in Acapulco, Mexico.

Fairy tales are made of maidens who catch the eyes of princes. Such was the wedding between Grace Kelly, actress and Oscar winner, and Prince Rainier of Monaco in April 1956. The event captured the imagination of people worldwide and continues to be referenced to date.

How big was the affair? Picture this; 200 reporters saw off the future princess as she sailed to Monaco for the wedding and 1800 more waited for her arrival- not to count the large press contingent that tagged along for the 8-day voyage.

A top baseball player falls in love with America’s sweetheart, the perfect All-American romance. Marilyn’s star was on the rise and DiMaggio was a slugger for the Yankees.

The couple kept a low profile during the dating period. However, that did not stop fans and reporters from following their every move. Their wedding was a low key event at San Francisco City Hall. Afterwards, though, a crowd was waiting outside the venue to bear witness to the power couple’s union.

Elizabeth Taylor was a phenomenal woman and so were her choices in spouses; she moved from politicians and singers to businessmen and construction workers. Her fifth wedding- to actor Richard Barton- however, goes down as one of the most iconic weddings of the 20th century.

They started dating while they were already married to other spouses. The affair was quite scandalous and become one of the most sensational celebrity news at the time; not to forget, the duo had co-starred in a few films. Without much of an engagement period, they got married less than ten days after Elizabeth’s divorce was finalized.

Mick Jagger and Bianca Macias’s wedding goes down in history as the event that made rock and roll part of high society. The lead singer of Rolling Stone was already on the spotlight for relocating the band from England to France.

The big day was even more dramatic; Bianca learned that Mick didn’t own much and almost called the wedding off. Additionally, the ‘exclusive’ wedding became open to the public thanks to French laws- a most welcome development to the hundreds of paparazzi, reporters and fans who kept up with the band.

A 5-foot cake and a 25-foot train pearled bridal dress were just some of the highlights of Princess Diana and Prince Charles’ wedding. Theirs is one of the most expensive celebrity weddings of all times. The “wedding of the century” cost about $70-110m million at today’s rates, with crown control alone costing almost $2 million.

Globally, about 750 million people watched the fairytale wedding via television, with Commonwealth countries holding events to mark the occasion. 3,500 official guests were in attendance with 2 million spectators lined along the procession route.

Arnold and Maria’s wedding was a big event. This was a union between a former bodybuilder and huge action movie star Arnold, and Maria, a TV journalist who happened to be a Kennedy- yes, the Democratic dynasty.

The couple was wedded in a lavish ceremony at the Kennedy compound in Massachusetts. Invited guests numbered 450 with throngs of fans and reporters lining the driveway at the venue. 85 policemen kept order while the FAA sealed off the air space over the compound.

A few months before the turn of the millennia, the world was treated to one of the most famous and expensive weddings off times: Victoria ‘Posh Spice’ Caroline got hitched to footballer David Beckham on an $800,000 ceremony.

With a cult following from Spice Girls and Manchester United fans, the couple was seen as the new royalty. According to a BBC report at the time, the rights to the wedding’s photography were sold at £1m- about $13m adjusted to today’s inflation.

Nowadays, celebrity weddings cost millions of dollars but in 2000 such expenses was unheard off, especially for a one-day event. You can now understand why the $1 million wedding between Brad Pitt and Friend’s Jennifer Aniston was such a shock.

The venue was a 5-acre Malibu property overlooking the Pacific. Only 200 guests were on the invite list with the venue being completely shut off – including the air space. What does $1 million get you? Flowers cost $75,000 while a 13-minute fireworks display cost $20,000.

Although the marriage ended in divorce, Gwen and Gavin’s wedding was what dreams are made of. The music couple wed in London at St. Paul’s Covent Garden. The bride pulled up in a 1970 Roll-Royce to an elite crowd of 150, including fellow rock stars.

And that was just the beginning, two weeks later the couple hosted a ceremony in Los Angeles. The vow-renewal event brought together L.A-based friends who didn’t make to London. In attendance were the likes of Brad Pitt and Jeniffer Aniston who were still newlyweds.

Katie Holmes’ dream was to marry Tom Cruise and that came to fruition in 2006 when the couple exchanged vows. The ceremony took place at Odescalchi Castle in Italy. The event was reported to have cost over $3 million- almost $4.9m in today’s rates.

The bride dazzled in a Giorgio Armani dress embellished with crystals from Swarovski’s collection; placing the crystals alone took 350 hours. Among the over 150 elite guests included celebrity couples J-Lo and Marc Anthony, Jada Pinkett and Will Smith.

What constitutes an expensive wedding, five jets and Westlife for entertainment? That’s exactly how Wayne and Coleen Rooney’s wedding went down. The whole event cost  £5m or $7.5m at today’s rate. Half of the cost, however, came from a magazine deal for the wedding coverage.

The celebration took 4 days and involved more than private jets; guests were treated to a luxury yacht plus a masked ball. As if that was not lavish enough, each guest’s budget was catered for to the tune of $10,000. 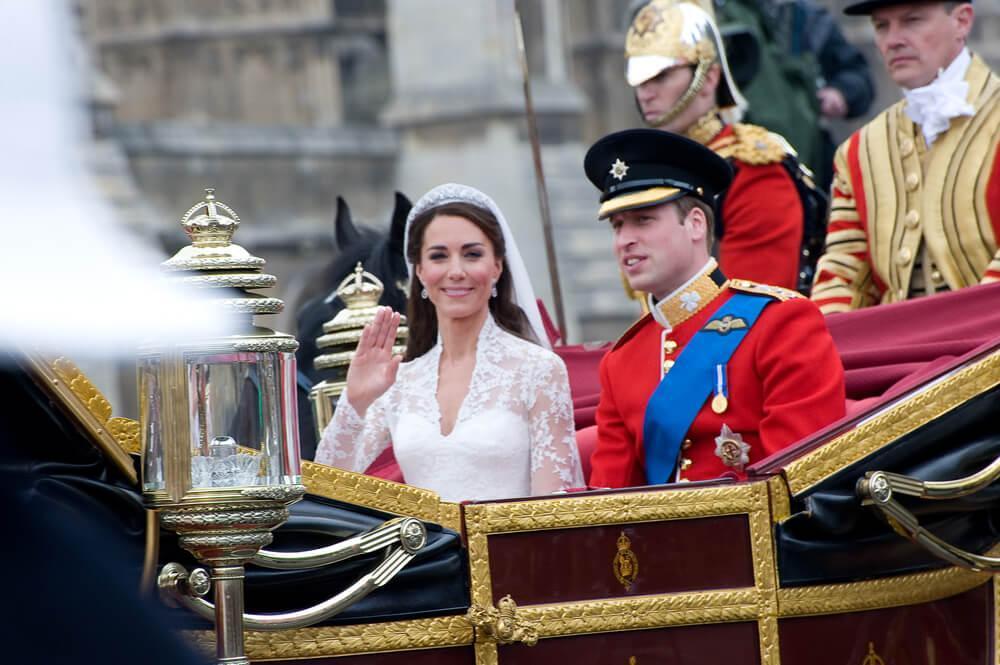 When British royals marry, the whole world watches. So was the case during the wedding of Prince William, second in line, and Kate Middleton, his girlfriend of 11 years. The ceremony was a national affair with family from both sides being joined by diplomats and foreign royals.

The official guest list was about 1,900 with over one million adoring fans lining the procession route- from Westminster Abbey to Buckingham Palace. This was one of the most expensive weddings in history, with the total cost estimated at around $34m in today’s currency.

How would it feel to be serenaded by your future husband as you walk down the aisle? Jessica Beil had the honour when Justin sang for her, an original song specifically composed for the occasion.

The couple said ‘I do’ in an intimate ceremony at Borgo Egnazia resort in Italy. 100 exclusive guests witnessed the nuptials. The whole outing took one week; Timberlake quipped, “It was a lot to ask of them to travel, so we figured we’d give our guests a good party!”

As with many celebrities, Kim and Kanye opted for an Italian wedding. The preparations and the main event were featured in some episodes of ‘Keeping Up With The Kardashians’. This ensured that millions kept tabs on the ongoings, making the wedding even more famous.

While most celebrity weddings are kept private, at least for the plans and photos, Kim has continued to share sneak peeks of the events. For example, we know that the bachelorette party was held in Paris and that designer Valentino threw a brunch for the wedding party on the eve of the wedding.

When both of you are beloved and big stars individually, it makes sense that your wedding will turn out to be famous. This was the scenario with Angelina and Brad’s nuptials. That said, it wasn’t a grand ceremony as most fans would have wished, but a small intimate wedding.

For starters, there were no outside planners since their 6 kids children were up to the task- they helped with the vows, baking a cake, and walking the bride down the aisle. The 20-people ceremony took place at the family’s estate in France. 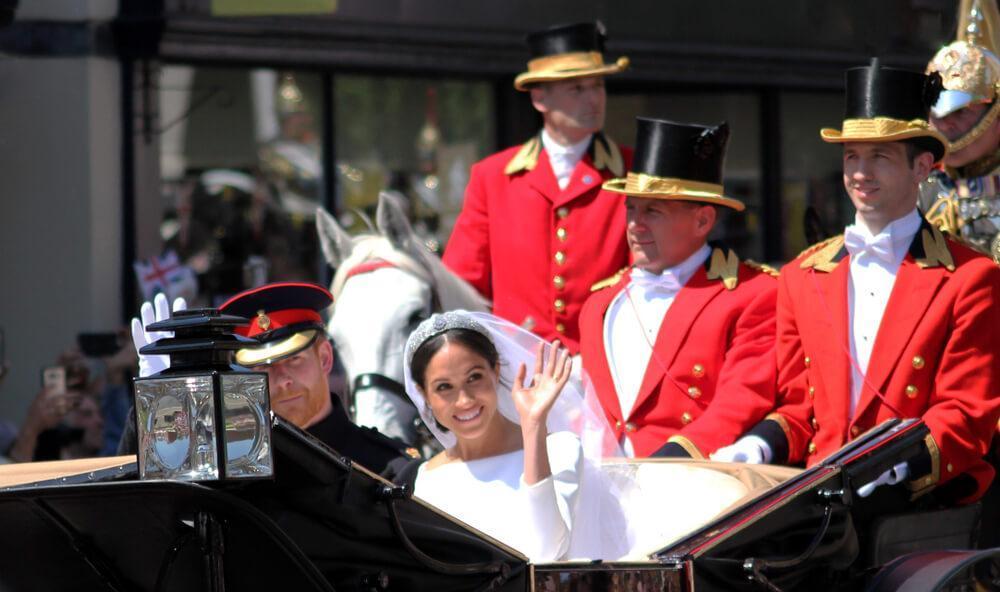 The wedding between Prince Harry and Meghan Markle was arguably one of the most glamorous weddings in our lifetime. Given that Harry is one of the most beloved British royals, the ceremony was followed by millions around the globe.

The event was estimated to have cost about $45m, making it the most expensive British royal wedding to date. As with his brother’s wedding prior, dignitaries and celebrities graced the ceremony. 2,640 members of the public were also invited to mark the celebration.

Nick, one-third of the Jonas Brothers, wedded Priyanka in a lavish Indian wedding held at Taj Umaid Bhawan Palace. With India being the birth country of the bride who also happens to be the 2000 Miss World winner, the ceremony was sure to draw attention.

This was a two-part wedding, with a Christian ceremony being held on Saturday and Hindu one on Sunday. The future Mrs Jonas held her bachelorette party in Amsterdam.

This is one of the most talked about wedding of 2019. Actor Chris Pratt and Katherine Schwarzenegger, daughter of former California Governor, started dating in 2018. A year later, they tied the knot at San Ysidro Ranch in California.

The ceremony was an intimate one with only close family members and friends attending. Although they did announce their engagement on Instagram, the couple kept most of their relationship from the public eye- so it’s understandable that the wedding took many by surprise.

From preparation to the wedding ceremony, guest lists to parties, celebrity weddings come with their fair share of awe. If you know where to look, you can definitely pick an idea or two to inspire your wedding.  While at it be sure to know what not to do on your wedding day because let’s face it; celebs can get away so much more than you can.