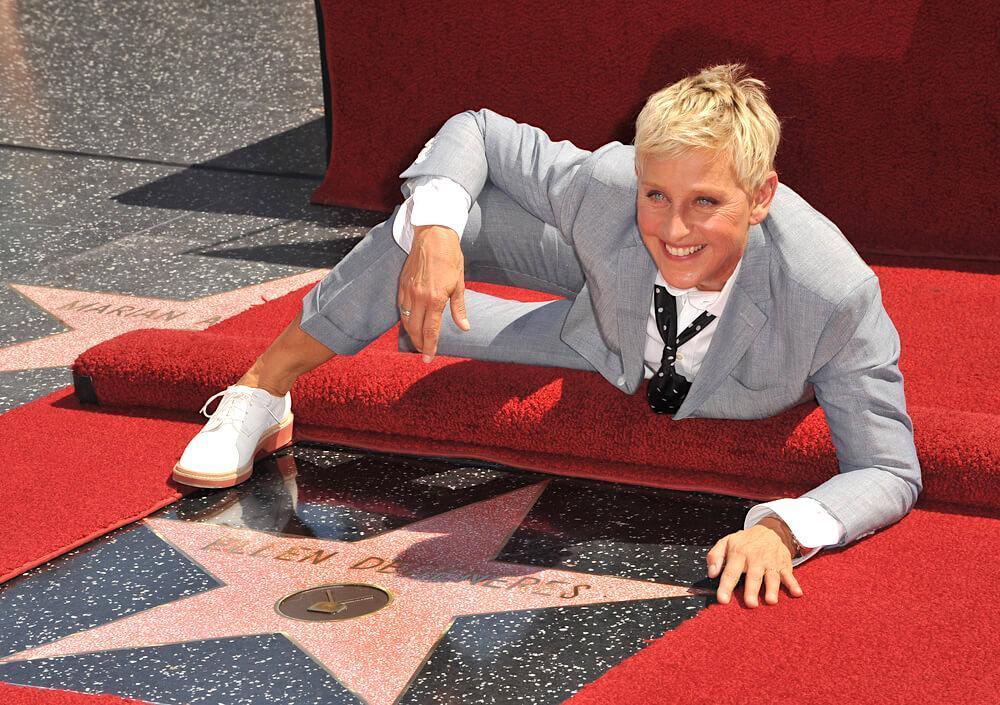 Two sitcoms and one talk show later, DeGeneres is one of TV’s most notable power players. Millions of viewers tune in everyday to watch The Ellen DeGeneres Show, where the host regales us with all kinds of skits, games and interviews, involving everyone from A-list celebrities to viral internet figures to everyday people.

Over the years, her clips have managed to make us roll with laughter and shed happy tears, but also helped the official Ellen YouTube place itself among the top twenty channels with most subscribers on the platform.

To remind you of all those special moments, here are all the times when Ellen DeGeneres made us love her even more.

She’s Responsible for the Best Selfie of All Time

In 2014, DeGeneres was tasked with hosting the annual Academy Awards, the most prestigious event in the film industry.

Other than doing an amazing job as a host, DeGeneres also managed to break the internet by creating what was probably the most star-studded selfie in the history of modern technology.

It all happened when, in between presentation of two awards, DeGeneres asked Meryl Streep if she could join her in the photo, so they could break the record for most retweets.

Seconds later, Julia Roberts joined, followed by one celebrity after another, who rushed to squeeze themselves in the frame.

Finally, actor Bradly Cooper grabbed the phone and made the selfie happen.

DeGeneres quickly posted the photo on Twitter, captioning it: “If only Bradley’s arm was longer. Best photo ever.”

The iconic tweet immediately prompted a viral response, even causing the website to crash for a couple of moments.

As of today, the picture has amassed over 3.3 million retweets and 2.4 million likes, making it truly the best photo of all times.

She Took Us Shopping With Michelle Obama

Sometimes, it’s heartwarming and relatable to see that celebrities are just like us.

But what happens when those celebrities are members of the First Family?

Well, turns out DeGeneres’ powers are such that she was able to show us what happened when Michelle Obama goes on a casual stroll to her local drugstore.

In 2016, as a preparation for the First Lady’s return to civilian way of life, DeGeneres decided to take her shopping at CVS (or, as DeGeneres would put it, “cotton, Vaseline and stuff”).

While Obama was figuring her way around the store, the hostess spent time cracking jokes, taking products out of their packaging and surprising the surrounding costumers.

After trying the coin machine, the ATM and various other services, the shoppers left with a haul that included some headphones for Sasha, the FLOTUS’ daughter, a cracked open box of wine and some snack – all while DeGeneres made herself comfortable in the shopping cart Michelle Obama was pushing.

Her Relationship with Taylor Swift is Precious

Combine America’s most beloved musician with its favorite TV face and you are bound to get at least a few amazing moments out of it.

Taylor Swift seems to be a regular on The Ellen Show, where she has partaken in a number of noteworthy moments, from heartfelt confessions to bona fide LOL-worthy skits.

Some of the most memorable interactions between the host and the pop singer include the time Swift took an opportunity to vent about her past relationships while appearing on the show; on a another occasion, she and DeGeneres took a moment to gush about cats.

On several different occasions, DeGeneres also made us all laugh by participating in her favorite pastime activity – scaring her favorite A listers.

And her most irresistible victim is none other that country-turned-pop star, who has been on the receiving end of many pranks orchestrated by DeGeneres (eight up to date, in fact).

Arguably the funniest one occurred when the host decided to scare the songstress as she was walking into the bathroom on the set.

DeGeneres jumped at Swift from behind the door when she was least expecting it, causing the singer to collapse on the tiles.

This moment became instantly GIF-able, and while the whole affair must have been petrifying for Swift, it sure gave the rest of us a good chuckle.

She is a Champion for LGBT Rights

Ellen DeGeneres is one the most prominent LGBT figures in Hollywood; her presence on television and movies can be directly contributed to the acceptance and normalization of gay and lesbian entertainers in the United States.

DeGeneres publicly came out as lesbian on the now-famous cover of Time that was captioned with the words “Yep, I’m Gay”.

A few weeks later, her character on the sitcom Ellen also came out, making DeGeneres the first openly lesbian actress to play a lesbian character.

Her coming out story was closely followed by the media; however, the reactions weren’t always so positive. Among some of the instances of discrimination she experienced were being fired from jobs and being prevented from attending charity event because of her sexual orientation.

The backlash didn’t stop DeGeneres being her authentic self and continuing to champion for LGBT rights at every possible occasion.

In 2017, twenty years after her coming out, DeGeneres briefly reflected on this moment on her show, but also talked about how much progress was made by society ever since.

In 2012, the Korean smash hit “Gangnam Style” took the world by storm, and everyone and their grandmas were rushing to learn the contagious dance that became as popular as the catchy tune itself.

No one was spared from the Gangnam fever – not even the pop superstar Britney Spears.

The only difference between her and the rest of Gangnam-dance enthusiasts was the fact that the pop diva learned the moves from none other than the master himself – K-pop sensation Psy.

Spears had first expressed a wish to learned the dance on Twitter. DeGeneres took notice of the star’s tweet and made her wishes come true by inviting both Spears and Psy to appear on Ellen.

Psy diligently broke down the whole dance into simple moves. Spears was experiencing some difficulties at first (in most part because of her dizzying stilettos), however, by the end of the lesson she managed to nail the viral dance like a pro, while DeGeneres was quick to get in on the Gangnam dance craze.

She Did a Hilarious Recreation of Nicki Minaj’s “Anaconda”

Back when Nicki Minaj released the bombastic video for her smash hit “Anaconda” in 2014, few people were left unimpressed by what they saw.

Between the colorful graphics, over-the-top sexual imagery and Minaj’s ever quirky style of rapping, it’s no wonder that the video quickly became a viral sensation. Soon afterwards, everyone was itching to do their own take on the rapper’s unique aesthetics.

Needless to say, Ellen DeGeneres was also eager to recreate the iconic “Anaconda” imagery. She conveniently took the opportunity to showcase the results of her efforts when Minaj was invited to appear a guest on The Ellen Show in September of the same year.

Both Minaj and the audience got the see the edited version of the video for the first time, in which DeGeneres made an attempt of recreating all the sensual moves from the video, including the hilarious twerking part.

As the video was rolling, no one, including Minaj, was able to keep a straight face at DeGeneres’ antics. In the end, the edited version and the rapper’s reaction amassed an impressive amount of views of YouTube, albeit the original rendition still remains supreme when it comes to view count.

She Introduced the World to Sophia Grace and Rosie

In 2011, two little girls donned in tutus and tiaras went viral on YouTube after doing a cover of Nicki Minaj’s 2011 record-smashing hit “Superbass”.

The video caught Ellen DeGeneres’ attention and she called them to appear on the show and meet the star behind the song.

The girls’ reaction to meeting the rapper were heartwarming to say the least and, other than the massive surprise, the “Anaconda” star also treated them to a joint performance of her catchy tune.

The video quickly became of most watched clips from Ellen on YouTube, and people just couldn’t get enough of Sophia Grace and her “hype girl” Rosie’s singing and dancing antics.

The “aw factor” even earned the two cousins a regular spot on the show, which was titled Tea Time With Sophia Grace & Rosie.

These days, the two girls have grown into teenagers, and they revived the nostalgia by wishing DeGeneres happy birthday in an adorable video message.

She Invited the “Damn, Daniel” Guys on the Show

Sometimes, even the most banal things can make us chuckle in ways we can’t explain.

That’s how two teenagers from Riverside, California became popular worldwide thanks to a simple Snapchat clip in which one of them complimented his friend’s outfit by uttering “Damn, Daniel” in a way that became instantly recognizable.

In a matter of weeks, everyone was obsessed with the catchphrase and DeGeneres decided to give the guys an even bigger platform by inviting them on the show, where they shared the story behind the catchphrase and how the viral online popularity is affecting their everyday lives.

DeGeneres showed her appreciation of the teenager’s simple humor by gifting them with a custom-made surfboard with “Damn Daniel” written on it, while Vans surprised Daniel with a lifetime supply of shoes from the brand.

She Loves to Play “Who’d You Rather” With Celebrities

Those familiar with The Ellen Show probably know that the hostess is quite fond of playing “Who’d You Rather” games with her guests.

The difference between her and the rest of us mere mortals is that she gets to find out all about the salacious preferences of our favorite stars.

Some of the A-listers who indulged DeGeneres in a game of “Who’d You Rather” include Kris Jenner, Saoirse Ronan, Jennifer Lopez and Demi Lovato.

One of the more interesting iterations of “Who’d You Rather” involved 2016 Democrat Party presidential nominee and former Secretary of State, Hillary Clinton. Clinton played a round of the game, in which she was supposed to pick her future Vice President. After much deliberation that involved names like Joe Biden, Beyoncé, Drake and George Clooney, the former FLOTUS decided to go with host herself as the potential VP.

She is a Fierce Animal Rights Activist

There are a few people in Hollywood who have done more for animals than Ellen DeGeneres.

Even though this is not one of the most well known facts about the talk show host, the fact that DeGeneres wholeheartedly dedicated to promoting animal rights is definitely something that shouldn’t be neglected when talking about her influence.

To begin with, both DeGeneres and her wife, Portia de Rossi, are outspoken vegans – in 2009, PETA named Ellen DeGeneres their organization’s “Woman of the Year”.

In 2011, she even launched an initiative and an accompanying website called “Going Vegan with Ellen”, with an aim to promote plant-based diet through detailed information on ethical concerns and plenty of mouthwatering vegan recipes.

DeGeneres was openly critical of President Donald Trump’s decision to lift the ban on the import of elephant trophies from Africa. She created a hashtag raising the awareness of the issue and amassed funds to donate to wildlife conservation centers in East Africa.

All things considered, is there anything not to love about Ellen DeGeneres? With her approachable, down-to-earth personality, hilarious sense of humor and ever-charitable spirit, it shouldn’t surprise anyone that the iconic TV show host is one of the most beloved celebrities in America and the world.