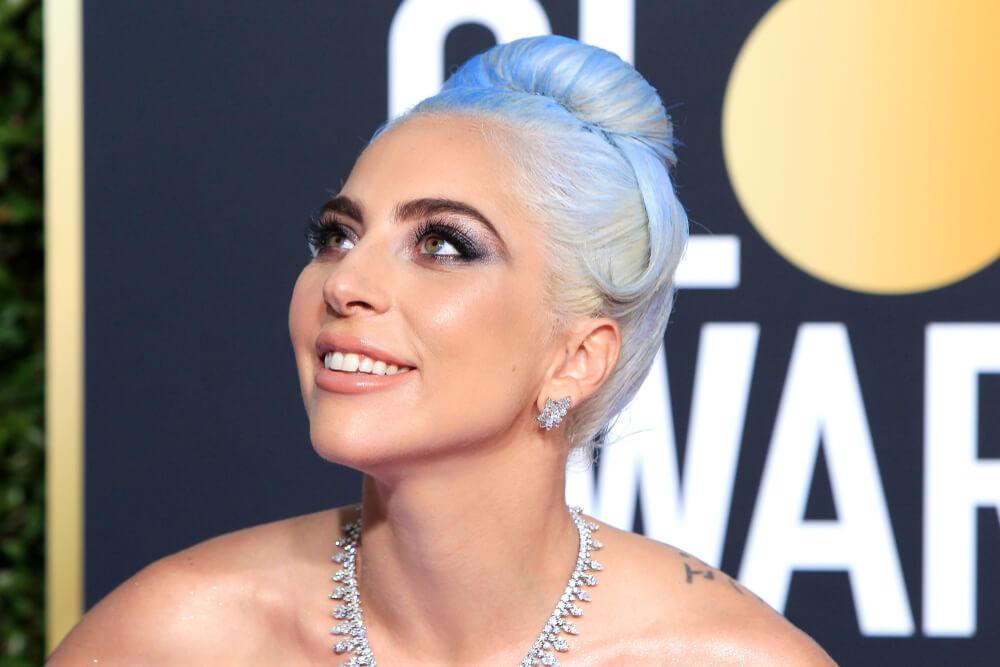 Every now and then, a celebrity makes an epic fashion statement. These instances are usually short lived and are forgotten as fast as they happen. However, there are exceptions to the trend; icons whose red carpet looks are the stuff of legends. None fits the bill better than Lady Gaga, the Queen of Pop who in 2010 wore a dress made of raw meat.

Born Stefani Joanne Angelina Germanotta, Lady Gaga started her singing career in her teenage years. Now in her early thirties, she has added actress, song writer and fashion designer to her ever growing portfolio. Her career is highlighted by unconventional and provocative looks- bringing us to her fashion flashback: Lady Gaga’s epic looks.

Let’s countdown her most amazing looks, from the most recent:

“And the winner is…” When it comes to the Grammys, these are words that are almost synonymous with Lady Gaga. The 61st event was no different; she took home three gramophones statues- with her single Shallow from the film A Star is Born winning in two categories. For the occasion, she wore a bedazzled gown by Hedi Slimane.

The gown was elongated at the hem with a thigh-high slit. In a true fashion befitting the superstar, she wore over 100 carats from Tiffany & Co. This included a diamond necklace with a total of 91 carats and princess-cut earrings made of 10 carats. This hand-crafted collection took about one year to design and Gaga showcased it perfectly.

The long column gown was made whole by metallic Jimmy Choo platforms. This, paired with blonde hair, loose textured waves and smoky eye makeup made her lighten the red carpet.

That not all, for her performance during the event she wore a bedazzled catsuit complete with a matching mike and platform boots.

2019 has seen impressive looks from the popstar with the Golden Globe Awards getting a glimpse at her girly side. Her look for the day was a blue voluminous Cinderella dress from Valentino. This was a proper homage to Judy Garland who wore a similar dress in 1954 for the original A Star Is Born– the remake of which Gaga was a lead.

The couture dress also came with a massive train. To complement the look, she dyed her hair light blue for the night. For accessories, she wore Giuseppe Zanotti heels and sparkly necklace from Tiffany & Co. The astronomical piece goes by the name Tiffany Aurora and came with a total of 300 diamonds.

Now, that’s how you dominate the red carpet.

The UK premiere of A Star is Born was another chance for Mother Monster to shine. She stepped out in a Victorian-inspired dress from Alexander McQueen collection. The renaissance styled dress channelled Queen Elizabeth 1, a respectable homage for the London audience.

The dress was pearl embroidered with gold and white embellishments. The off-the-shoulder corseted gown came with voluminous sleeves for a complete regal look. It also featured a harlequin print skirt and a ruff collar. The show-stopping look dress was softened by a simple up-do hairstyle with swept bangs. For makeup she went with feathery lashes, pink lip gloss and white eye liner.

For her contribution in a star-studded CBS special, Gaga channeled her wild sparkly side. She wore a white ensemble; a look that made her the center of attention in a dimly lit stage as she played on a dark colored piano. This was during her performance of Your Song, a 1970 hit by John.

The Queen of Pop was on stage as part of the “Elton John: I’m Still Standing — A Grammy Salute” tribute concert. She delivered the cover in feather-covered shoulder pads and white sunglasses. The look was identical to most of John’s memorable performances- a solid tribute from Gaga who is a passionate fan of the living legend.

Lady Gaga does not shy away from controversy and much of this is seen in her fashion choices. The 2017 Grammys was one such instance where she flashed enough flesh to get everyone talking. Her look for the event was an all-black ensemble with plenty of underboob. 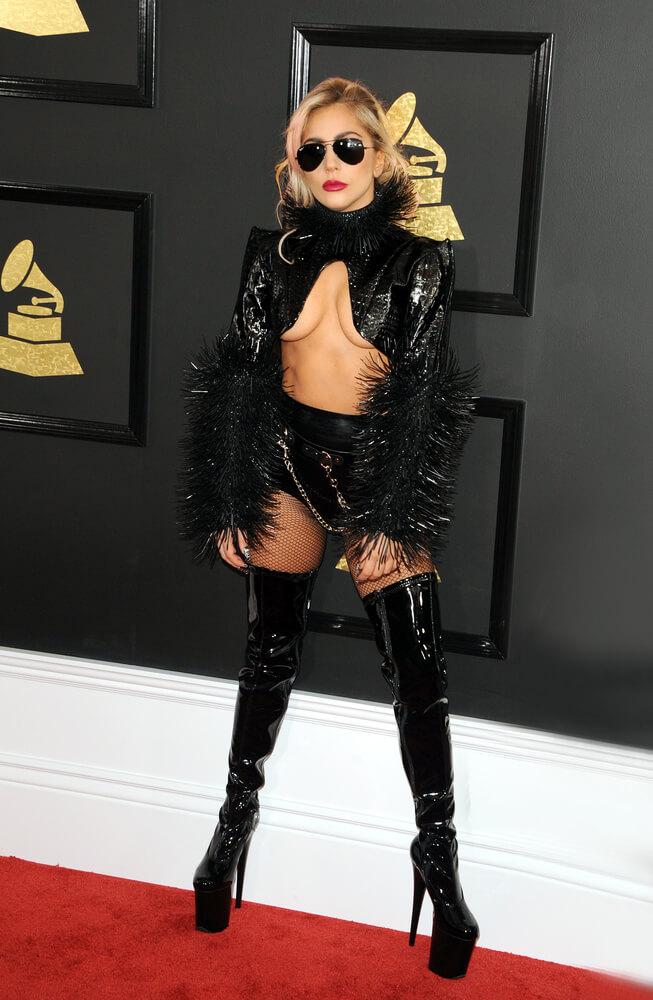 She wore what can only be described as a tiny black leather outfit. This included a crop top that barely covered the front with the edges just reaching to the nipples. For the lower body she had on black hot pants and PVC platform boots. To complete the extremely revealing look, she added fishnet tights and chain detailing on the pants.

Although she was not up for any awards, she still stole the show at the 59th annual event. She was on stage to perform with Metallica, for which she switched the crop top for an equally tiny cropped band T-shirt.

The Super Bowl 50 was another opportune moment for Gaga to stamp her authority on the national scene, and she did just that. Wearing a sparkly red suit and bringing her ‘A’ game, she sang the National Anthem to the over seventy thousands attendees.

Her entire look was choreographed to showcase patriotism.

The suit was custom-made by Gucci with an ensemble perfect for the event. The matching two-piece was made sexier by going braless and wide flare pants that fit tightly at the hips. What stole the show though was her choice of mismatched shoes. Also by Gucci, the platform shoes were flag-inspired- red white and glitter blue.

The 87th Academy Awards saw Lady Gaga steal the spotlight at the red carpet in a very feminine white gown. The dress was a custom made piece by Azzedine Alaia, a Paris-based designer. The same designer was behind costumes that Gaga wore later while performing a Sound of Music tribute.

The standout part of the glittery look however was the inclusion of red leather gloves. These were a contrast to the white dress but matched her lipstick and a pretty hair band that held a twisted ponytail. The edge of glory hitmaker completed the meticulous look with Alaia stilettos. These were front-laced mirror metallic stilettos with eight-inch heels.

With a nomination in the bag at the 2015 Grammys, Gaga stepped into the red carpet ready to wow. The artist stunned in a glittery gown from Brandon Maxwell’s collection. Adorned with metallic seashell-shaped embellishments, the dress was mermaid inspired.

A very generous slit and plunging neckline completed the sultry look. She suffered a nip slip at the red carpet but still went on to have a good time. She also stunned in complete Lorraine Schwartz jewels, which included an emerald necklace and a matching bracelet. 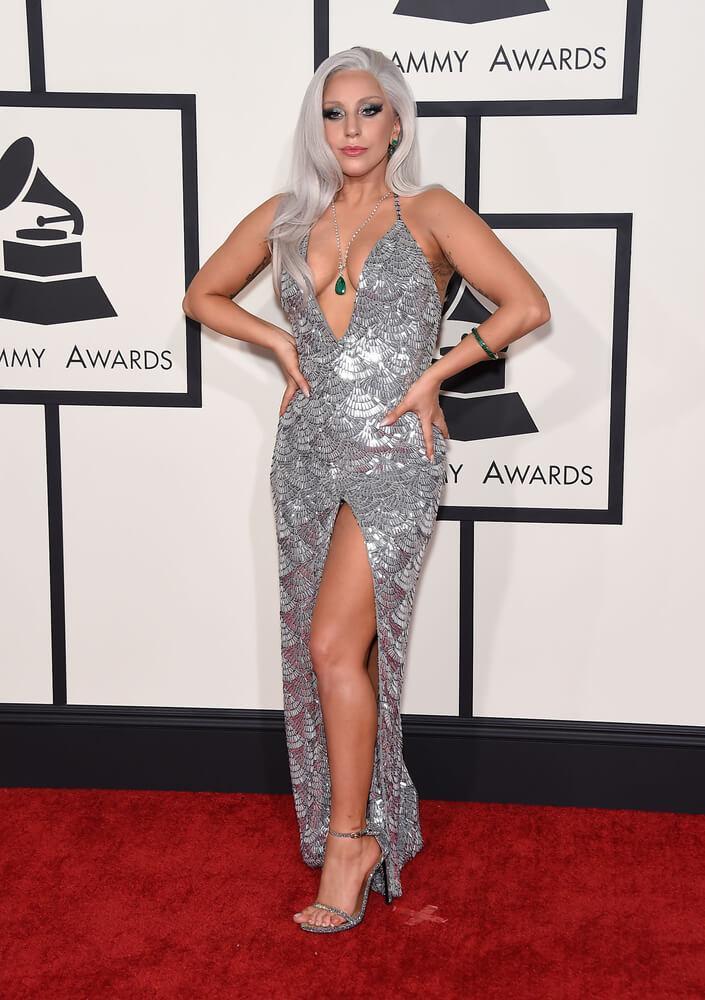 Cheek to Cheek, her collaboration with Tony Bennett made the cut and won the Best Traditional Pop Vocal Album. For the performance of the night, she switched into a black glittery dress and adorned shiny jewelry.

Deviating from her usually wild and crazy looks, Mother Monster wowed in an old-school Hollywood gown. This was a baby pink dress complete with a matching chiffon scarf. The refined mermaid look was revealed at the 86th Academy Awards. 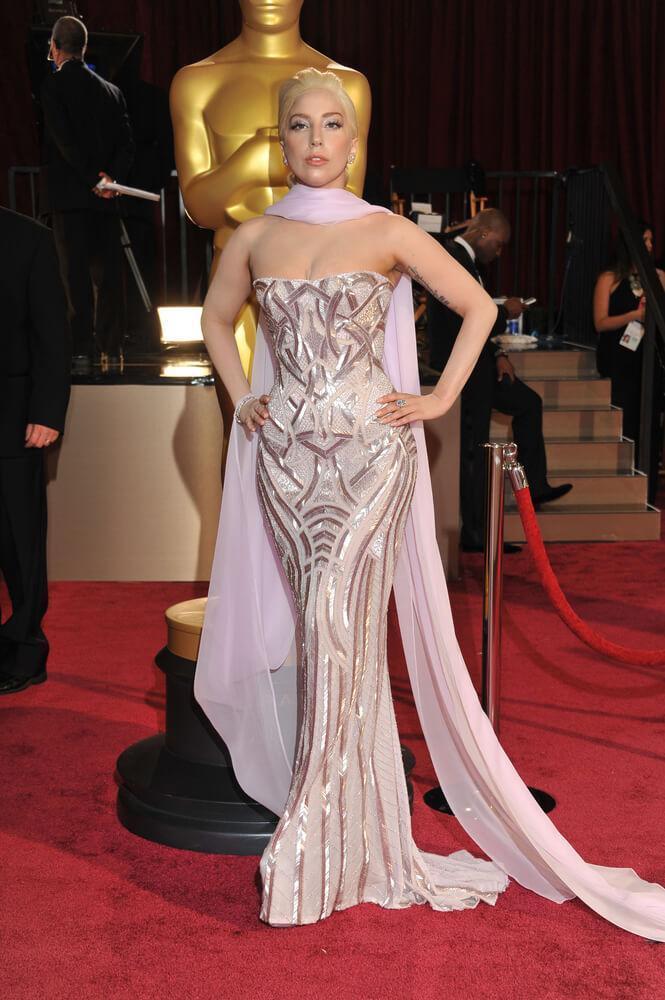 With jewels from Lorraine Schwartz and the shiny metallic Versace gown, she brightened the red carpet. She went with a simple up-do style for the hair and platform boots for the whole old Hollywood feel. Although she wasn’t going up the stage for a performance or presentation, her look was hailed as one of the best in the event.

The 2014 MusiCares Person of the Year Gala saw Gaga unveil one of her best looks to date. The event was in honor of Carole King and to grace the occasion, she wore a stunning couture gown. The design was from Alexis Mabille spring collection. 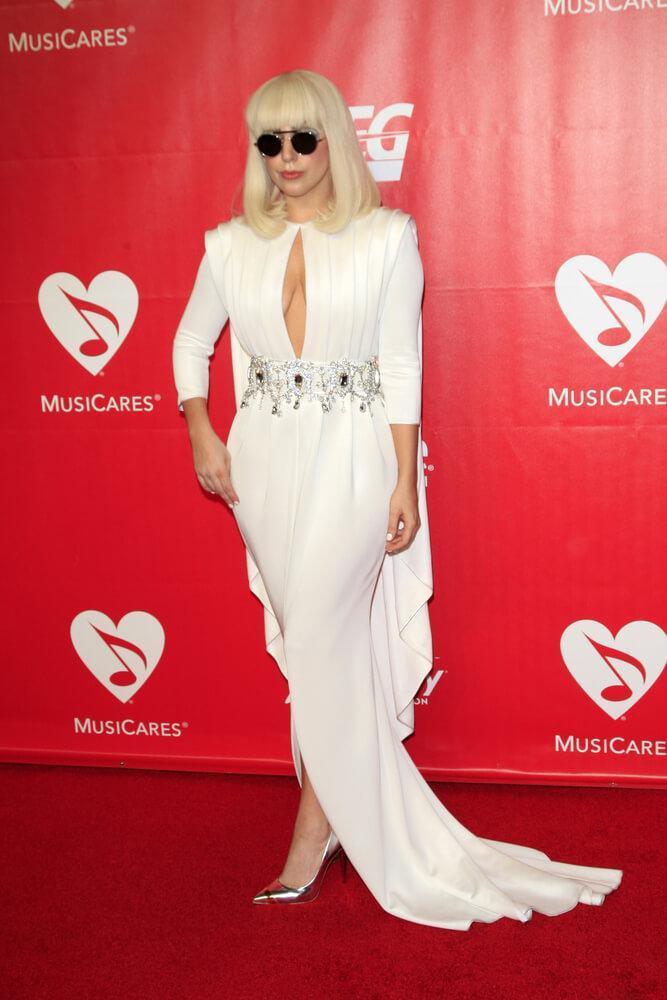 This was a white keyhole gown with a pleated bodice. For jewels, she wore a silver waistband to complete the glam look. In her usually high heel trend, she chose metallic leather pumps for the extra height. Her platinum hair sported blunt bangs with circular shades to give it more attention.

At the 2013 MTV VMAs Gaga was topping the charts with her single Applause from the album Artpop. To start off the event, she was on stage to perform the acclaimed song and she did so in style. All-white and square was her look for the night.

With only her palms and face being visible she wore a flowing white gown with a cube for a hat. The boxy outfit was made more stunning by a pearly necklace. The look was however short lived as dancers tore it off during the performance to reveal a sparkling bodysuit. She was later helped into a glittering blue blazer and skirt outfit plus a blond wig.

Straight from being named the Face of Versace, Gaga attended the AMAs ready to showcase her wild side. It was not just the dress she chose that stunned but how she made her entry. Riding a mechanical horse and wearing a lilac dress she presented an embodiment of a modern Lady Godiva.

Though it was not one was most her bizarre looks, the additional of a horse on the red carpet is still one of the best entrances ever. Way to go Gaga!

31st December, 2012 found the Born This Way hitmaker in Time Square for the New Year countdown party. To perform her hits, she wore what can only be described as a black and caged outfit.

Her look for the night included a black figure hugging bodysuit with shiny embellishments and a cage over her head. The globe shaped cage was tightly secured at the hips by a broad leather belt with a matching facemask. With her second studio album riding high, she had every reason to go crazy as the New Year beckoned.

At the 2011 102.7 Kiis FM Jingle Ball, Lady Gaga hit the red carpet in one of her most daring looks. The look included a plunging neckline gown encrusted with Swarovski jewels. The dress was custom made by Giorgio Armani just for the star. To add on to the glamour, the slit was thigh-high with the material flowing into a mermaid skirt.

The dress also sported high extravagant shoulders and a broad elegant hat. The all-black look was made whole by wearing matching studded boots and classic dark sunglasses from Wayfarers.

That not all, she had a black shiny bike for a prop on stage.

Yes… the infamous meat dress that earned the Queen of Pop fans and haters in equal measure.

The dress was designed by Franc Fernandez and unveiled at the 2010 VMAs. It was styled by Nicola Formichetti with flank cuts as the raw meat of choice. The cuts were chosen for their ability to keep shape. What’s more, no fitting was done for the look and the designer only got to stitch it together backstage for the first time.

To ensure complete surprise, Gaga showed up for the event in a different outfit; an Alexander McQueen dress and later adorned an Armani piece before the big reveal.

She had a record thirteen nominations including two for the coveted Video of the Year, meaning she was literally the center of attention- with or without the dress.

The look however did exactly what it was meant to do; provoke. Following the ceremony, the artist explained that she wanted to get people fighting for their beliefs. She specifically pointed out the don’t-ask-don’t-tell (DADT) US military policy that targeted LGBT service men and women.

Lady Gaga is one of the most accomplished artists of the 21st century. With nine Grammy awards and a host of other trophies, she is a force to be reckoned with. While her voice and electric performances making her a darling worldwide, it’s her looks that usually get more attention. Above is just a peek into some of her most amazing, outrageous, bizarre, stunning and memorable looks over the years.